I tried using the Automatic Giveaway feature recently and at the beginning, all was working well. I used a custom list for the prizes, all settings made how I wanted them to and the automatic messages in chat were working.

Is there a particular command or response they need to make for the bot to recognise them as the winner?

On top of this, those who were picked as winners but then passed over due to not recognising the response; they are then not able to enter the next giveaway as they have been flagged as having already won (though they didn’t because the bot passed over them) and receive a message saying they’ve reached the maximum wins. I’m not sure where this is kept though to clear for them to enter the next giveaway.

Hope there’s some insight into these two issues as I’m really wanting to utilise this tool.

Hello,
How many tests have you done with this configuration?

Happy new year to you too (In advance!)

No problem on our side, we made some “optimizations”, I let you redo the test. 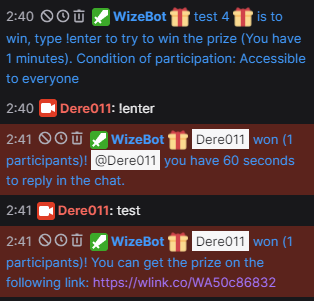 Concerning the draw limit, it is taken into account only for the winners who answered now

I just tried the one configuration so far. I went through and checked all configurations but can’t see anything that would stop replies from being noticed. Is there a setting somewhere that I may have missed?

This topic was automatically closed 5 days after the last reply. New replies are no longer allowed.